We most commonly associate “addiction” with some kind of compulsive substance abuse (alcoholism, addiction to tobacco, drugs, etc) – but “addiction” could equally be applied to certain kinds of compulsive activities (e.g. Workaholism). While activity addictions are in some ways different from chemical ones, all addictions have one thing in common: they are all ways of avoiding experiencing or dealing with uncomfortable emotions. 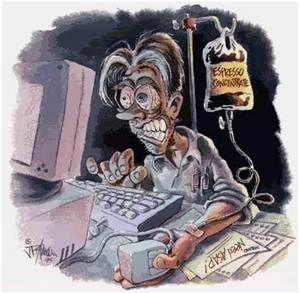 James’ story, told to me over a long evening together, is a case in point. James was a lawyer specialising in litigation, and though the work was intense and often stressful, he was always able to keep his cool and he thrived on it. He had enormous energy and endurance and worked long hours – but he had many other interests that he actively pursued. For example, he was involved in rock climbing, was a committed and talented karate student and a skydiver.

This capacity to control his emotions and keep his cool under pressure made a major contribution to his success at work and in other activities. But James said this had reached a point where he almost never experienced emotions of any kind because he was constantly involved in intense, focussed action almost all of his waking hours. This had resulted in the break up of two marriages, mainly because his wives hardly ever saw him, and when they did, he would never express or show any emotions or talk about anything very personal. His last wife told him it was like living with a robot.

After the second break up, for the first time as an adult he began to feel deeply depressed and lonely, and he sought help from a counsellor. Working with his counsellor, James discovered the source of his activity addiction. James’ parents were both very cool and emotionally distant, and James remembered that this made him feel sad and lonely as a child. However, when he was about seven or eight years old he discovered that if he got intensely busy these feelings would go away. This worked so well that by the time he was an adolescent, he was intensely busy all the time and he never felt sad or lonely – but he also rarely felt any emotions at all.

James told me that the central lesson for him was understanding that, when he shut down the capacity for experiencing unwanted emotions (sadness, loneliness, etc) two things resulted: Firstly, he built up a huge (subconscious) charge of these unwanted emotions, because they had never been expressed and thus given release; and secondly, he gradually lost his capacity to experience the desirable emotions (love, joy, etc). As James’ counsellor put it, “when one emotional system is shut down, this tends to shut down the others as well”. Also, James discovered that the reason he had suddenly started feeling sadness and loneliness is that the break up of his second marriage had finally released all of the stored emotions that his activity addiction had previously kept suppressed. But James came to see this as a blessing because it caused him to seek help.

James spent several months working with a counsellor on overcoming his addiction. By the time I met him he had been free of his activity addiction for several years – and he had been in an emotionally fulfilling relationship for over a year. James still had his ability to turn off his emotions in situations where emotional control was appropriate and useful. But he regained the ability to both experience and express the whole range of emotions that are essential to any close relationship.

Do you know someone with an activity addiction? How has it affected their life and relationships?