SHOULD VISIONARY LEADERS LEARN TO MANAGE THEIR OPTIMISM? 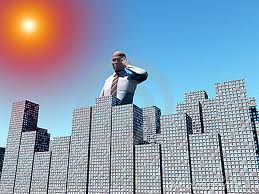 Jane had recently been appointed the CEO of a large clothing retail chain. She was a very articulate, optimistic, creative and charismatic person and had risen up the corporate ladder into leadership positions quite rapidly. Her charismatic personality and her many successes within the company had won her the CEO position at the early age of 35. However, along with her many strengths as a leader Jane also had a significant Achilles Heel: Given her charismatic and inspiring leadership style, she found it difficult to communicate with and listen with very conservative, analytical people.

Shortly after being promoted to CEO, working with her senior management team, she had created a vision and strategic plan for growing the company quite rapidly. However, her CFO – a highly conservative analytical thinker – had warned her against expanding so rapidly, saying that if retail sales dipped even slightly, the company would become insolvent. Feeling her usual irritation with this very conservative and analytical person, she ignored his warning and began implementing the expansion plan. Then six months into the plan the global financial crisis hit, retail sales plummeted – and very suddenly the company was on the verge of collapse.

The immediate recommendation of the senior management team and board of directors was to lower costs by cutting staff by between 15 and 20%. Feeling shocked by her role in creating the company’s problems, she was able to manage her innate optimism and really listen this time. It became clear to her that a major part of the short term strategy for surviving would have to be cost cutting. But Jane genuinely cared about the people in the company – and she knew that ruthlessly cutting staff would result in creating a company culture of fear and distrust.

At this point she booked a consultancy session with me to help her and her senior management team come up with some ideas for cutting costs without shedding staff. Within several hours it became quite clear that there was only one real alternative option to staff cutting: this was offering staff the alternative of taking a 15% salary cut for six to twelve months, with the senior managers agreeing to take a larger cut of 20% to demonstrate their willingness to share the sacrifice.

But Jane was concerned about how she would be able to convince the very conservative board to back up this option. I explained that the key to her success in this would involve working closely with her CFO to create a very detailed and thorough financial plan, based on salary cuts, which would be convincing to very conservative minds. This would test her resistance to interacting with conservative, analytical people – but she could also see that taking this step was essential.

Jane spent the next 10 days communicating often with her CFO as he worked with his staff to create this financial plan. She spent the rest of the time working with her senior management team developing a new vision and strategic plan that focused on achieving superb customer service rather than company expansion. Then she and her CFO gave the presentation to the board together, with her presenting the overall vision and strategy and the CFO presenting the numbers. The board supported the new plan – but almost certainly would not have without her working closely with the CFO to ensure its financial soundness.

Afterwards, Jane told me the whole event had made her highly aware that not carefully managing her own visionary, optimistic leadership style could result in her natural strengths becoming Achilles Heels.

Have you encountered visionary leaders seduced by their own optimism? What was the result?